From Facebook to Cape Town, here's what you need to know.

Two things happened in the world of Facebook yesterday, the company announced it’s earnings which exceeded expectations and there was a drop in users for the first time ever. The last quarter earnings were 47% higher than last years, bringing in $12.97 billion. BILLION. This comes from an increase in ad revenue as the platform continues to push out business content that is not backed by moola. In terms of users, comparing to the end of last year, time spent by users has fallen by about 50 million hours a day. This news brought the shares down by more than 4% in after-hours trading. Zuckerberg responded by reminding investors, “The most important driver of our business has never been time spent by itself. It’s the quality of the conversations and connections.” He thinks the revenue will continue to grow, and fewer users may mean more revenue opportunities. The upbeat forecast by Zuck led to a rebound in shares and pushed them up 1.4% at $189.50.

In the coming year, Facebook plans to hire thousands of employees to keep an eye on what’s being posted to keep a handle on fake news and foreign influence (looking at you Russia). They started cracking down on quality control last year in March, and they continue to do so. Facebook will also be banning cryptocurrency-related ads. “We’ve created a new policy that prohibits ads that promote financial products and services that are frequently associated with misleading or deceptive promotional practices, such as binary options, initial coin offerings and cryptocurrency,” Facebook’s product management director, Rob Leathern, said. 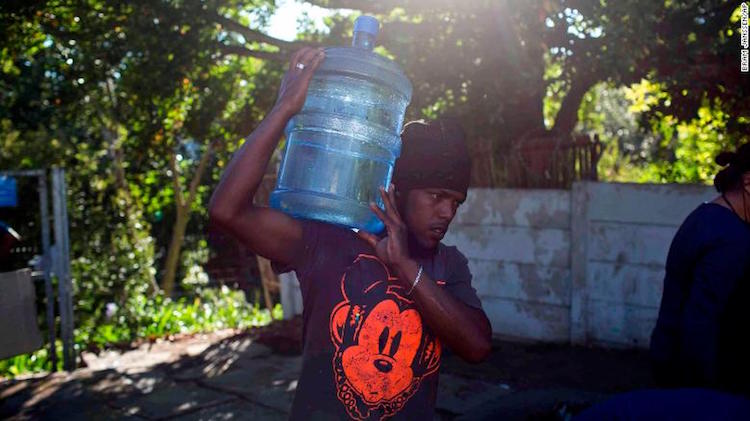 Day Zero is looming for Cape Town as water supply continues to drop. Today they implemented even stricter water usage policies with major fines for people who don’t abide in hopes to buy time for other water supply options. Residents are now only allowed to use 50L a day – a 90 second shower takes about 15L of water, just think about that. If water supply continues to drop, Day Zero – the day the city runs out of water – is forecasted to be April 16. The city of four million, also one of the greenest cities in the world, has been enduring the worst drought in a century for the past three years. A changing climate and rapidly growing population have made matters worse. It doesn’t help that more than 50% of the population aren’t adhering to the water limit rules making it hard for authorities to control the situation. Long lines are forming at natural springs and stores are sold out of bottled water as the apprehension of the crisis ahead has started to sink in.

Remember when you’re insta feed blew up with Hawaii residents freaking out about a missile attack and then it turned out to be false? The FCC looked into it and well, the employee that sent the warning out to everyone’s phones, actually thought there was a threat and it wasn’t an accident at all. The government worker didn’t realize they were running a drill and thought the test threat was for real. Unfortunately, not knowing when it’s a test and when it’s the real deal will get you fired. The false missile threat was left uncorrected for 38 minutes as government officials were trying to figure out what to do and the people of Hawaii were in a state of panic. The agency’s top official, administrator Vern T. Miyagi, “has taken full responsibility” for the incident and resigned Tuesday. The State has issued new processes for alerts and test drills so that this doesn’t happen again.

Doping bans on 28 Russian athletes were overturned throwing the International Olympic Committee’s policy on Russian doping into chaos. The Swiss-based Court of Arbitration for Sport (CAS) upheld the appeals of athletes given lifetime Olympic bans for doping violations during the 2014 Sochi Winter Games due to insufficient evidence. The 2018 Olympics are set to begin in South Korea in just over a week, but this could mean that the athletes could compete in the upcoming Games if they wanted. 11 other doping violators that were proven were given a shortened sentence – from a lifetime ban to just a 2018 Games ban. The IOC said the decision “may have a serious impact on the future fight against doping.” They also said that even though the 28 athletes’ appeals were upheld, it doesn’t mean they all qualify to compete in the upcoming Olympics.

The ban on Russia’s involvement in the 2018 Games is the severest punishment ever meted out by the IOC on a participating nation, and any athletes competing must do so under a neutral flag. They would compete as “Olympic Athletes from Russia, “with no use of the Russian flag or national anthem permitted.

5. State of the Union Speech

President Donald Trump gave his first State of the Union speech on Tuesday night and reflected on 2017 and his accomplishments as well as other ‘Merica issues. He assured the audience that America is “safe, strong, and proud” but didn’t mention things like the Russia investigation or NAFTA. Although you have to take Trump’s ideas with a grain of salt since you never know when he’s going to change his mind he did mention a massive infrastructure bill he wants Congress to look at and had talking points about his immigration policies. Overall, it’s “America First” in Trump’s books, not only in rhetoric but in policy as well.