From #TorontoStrong to Meek Mill, here's what you need to know. 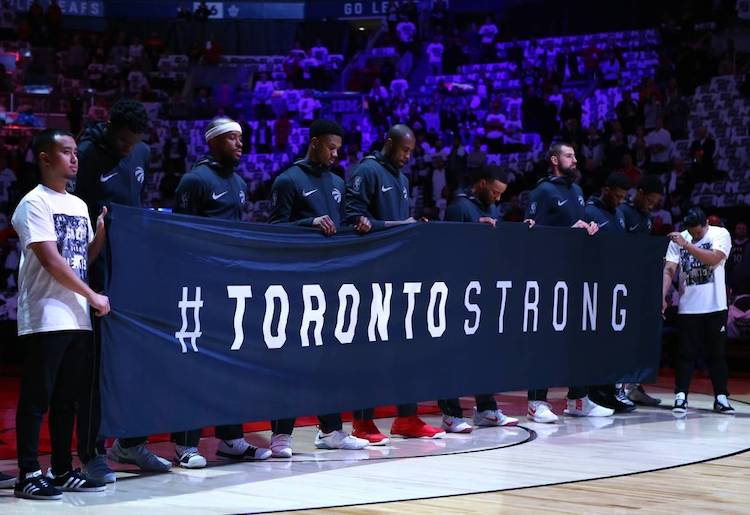 The city of Toronto and the entire country have come together after the horrifically tragic attack on Monday afternoon when a van intentionally plowed through a busy sidewalk in Toronto’s North End. As identities of the victims come to light, the families shattered by the deadly rampage need all the support our country can give. Police have charged 25-year-old Alek Minassian in connection with the incident, laying 10 first-degree murder charges and 13 attempted murder charges. Mourners continued to visit the area on Yonge Street to add to a growing makeshift memorial to the victims, leaving flowers, candles and messages of support in myriad languages. On Wednesday night, sports fans came together to show support and love for their city as both the Hockey and Basketball playoff games were taking place. Above the Air Canada Centre screen, where the Raptors and Leafs games were broadcast, the Canadian and American flags flew at half-mast. Usually, the two groups of fans are separated, but after the Raptors win they poured together, forming a screaming crowd full of Toronto pride and unity.

The small plane was inbound to Calgary International Airport before making an emergency landing on 36th Street south of 16th Ave in the NE. The Piper Navajo radioed into the control tower reporting losing the right fuel pump and had to make the landing. The plane was able to land safely and none of the six people on board were injured. A crane was brought in from the airport to lift the plane onto a flatbed truck and traffic was able to flow normally again by 4pm. The investigation is still on-going for the reason for the emergency landing. The company released a statement yesterday saying the plane landed due to power loss but investigators will be looking deeper into the maintenance history, meteorological conditions, operation of the equipment, operation policies, and regulation requirements.

If you’ve had Wake Me Up on repeat since last Friday, we’re with you. The shocking death of Tim Bergling, the Swedish DJ-producer who performed as Avicii had everyone reeling and reminiscing on their favourite times jamming out to his beats. The 28-year-old was found in Muscat, Oman, having died from an apparent suicide. His family shared a statement about the musician’s death, saying, “He really struggled with thoughts about meaning, life, happiness. He could not go on any longer. He wanted to find peace.” The fame and lifestyle were overwhelming for the young DJ who was at the forefront of the EDM movement that began to dominate the pop landscape in the early 2010s. He loved his fans but shunned the spotlight leading him to cancel live touring and retiring two years ago. Many of Avicii’s friends, collaborators and musical admirers expressed their grief after first learning of the DJ’s death.

Rapper Meek Mill was freed on bail Tuesday after Pennsylvania’s Supreme Court ordered a judge to release him while he appeals decade-old gun and drug convictions. Even though he is free, he says “I ain’t feel free since I caught this case at age of 19 — I’m 30 now.” He wasted no time getting back into real life – just after being released from prison, Meek Mill was whisked away in a helicopter courtesy of Philadelphia 76ers co-owner Michael Rubin. He sat courtside at the Sixers playoff game against the Miami Heat alongside Rubin and comedian Kevin Hart. He got to ring the ceremonial Liberty Bell replica to wild applause at the Wells Fargo Centre in his hometown. Meek Mill was unjustly convicted at his initial trial in 2008 as the court has now realized the cop that convicted him lied under oath. Meek Mill said he plans to fight to “overturn” his conviction in court and shine light on a justice system in need of reform.

Environmental Protection Agency Administrator Scott Pruitt, proposed a new rule on Tuesday that would restrict the kinds of scientific studies the agency can use when it develops policies. What does that mean? The E.P.A. will require that the underlying data for all scientific studies used by the agency to formulate air and water regulations be publicly available. This will cause serious implications for important research from the past decades because the studies will become unavailable to policymakers if scientists were unwilling to break the confidentiality agreements they struck with study subjects in order to collect sensitive personal information. If finalized, the measure would be difficult for a future administration to unravel. Supporters of the plan include the chemical and fossil-fuel industries and prominent climate change denialists. The public will be given 30 days to offer comments on the proposal before a final rule is issued, according to the draft.