From Canada Post strikes to romaine lettuce, here's what you need to know.

Canada Post may be ending their strikes before the rush of Black Friday hits. The Canadian Government has said they are willing to order an end to the strike and legislate employees back to work so that there aren’t major delays with Black Friday/Cyber Monday shopping. “We strongly encourage both sides to reach a deal and are prepared to table legislation if we do not see a resolution over the next few days, a step we do not take lightly,” Labor Minister Patty Hajdu said in a statement late Tuesday. On Monday, the unionized workers declined Canada Post’s latest offer, saying it was a “last ditch” effort to have workers return for the holiday season. However, with the spike in shopping starting tomorrow until the end of the year, The Retail Council of Canada sent a letter to Trudeau to end the strike to ease the parcel traffic on the already strained postal system.

Online retailers have started suggesting their alternatives to Canada Post to help get packages delivered on time. Etsy Inc.’s Canadian website posted a message saying orders won’t be delayed and will be sent by United Parcel Service if necessary. Amazon.com Inc.’s Canadian page says it uses the postal service and other couriers such as UPS or DHL Worldwide Express.

There has been a recent outbreak in E. coli cases in the US and Canada linked to romaine lettuce. In the US the CDC sent out a rare alert warning “consumers, restaurants and retailers not to eat, serve or sell any romaine lettuce as it investigates an outbreak of E coli”. This is the second major outbreak to romaine. In Canada, 19 cases have been reported across Ontario, Quebec and New Brunswick. The Public Health Agency of Canada has warned people in those provinces to not eat lettuce at all. It is the same strain that caused E coli outbreak last year which is making people question why the government has issued a mandatory recall. “It’s worrying that it’s the same strain [of E. coli as last year], which basically means it’s the same source. And that means they never solved the problem,” said Prof. Keith Warriner, a microbiologist specializing in food safety at the University of Guelph. This strain, E. coli O157, is particularly “virulent,” meaning it makes people sick more often than other forms of the bacteria. In both Canada and the US, they haven’t been able to pinpoint the source of contamination, all products tested as part of the investigation have been negative so far.

The Canadian Government has announced they will not be cutting corporate taxes but instead, Finance Minister Bill Morneau introduced on Wednesday a package of tax write-offs and investments. This boost will effectively reduce the corporate tax rate in Canada from 17% to 13.8%. These measures come after President Trump brought in a package of tax reforms in 2017 to slash the corporate tax rate there from 29.8%to 18.7%. “The U.S federal tax reform has significantly reduced the overall tax advantage that Canada has built over the years, posing important challenges that, if left unaddressed, could have significant impacts on investment, jobs and the economic prospects of middle class Canadians,” the fiscal outlook states. There are three key points that the government will do following these measures.

“First, manufacturers and processors that acquire new machinery and equipment after Nov. 20, 2018, will immediately be eligible to write-off the full cost in their tax returns for the year that new equipment is put into use.

Second, businesses buying certain kinds of clean energy equipment after Nov. 20, 2018, will also be eligible to fully write off those costs as part of a push to get more businesses investing in clean technology.

Third, the plan will also triple the amount companies can deduct from their tax returns for capital investments in their first year of use through what will be known as the Accelerated Investment Incentive.” Source.

Kenya has 36% of Africa’s giraffe population but numbers have decreased by some 67% since the 1970’s due to poaching. Giraffes are now classified as “vulnerable” on the IUCN Red List. The Red List had announced the giraffe as “Vulnerable” in 2016 but has now brought attention again to the animal as numbers are still declining. The IUCN Red List reveals that they are in serious trouble, with three subspecies now being considered as ‘Critically Endangered’.

“Whilst giraffe are commonly seen on safari, in the media, and in zoos, people – including conservationists – are unaware that these majestic animals are undergoing a silent extinction. While giraffe populations in southern Africa are doing just fine, the world’s tallest animal is under severe pressure in some of its core ranges across East, Central and West Africa. It may come as a shock that three of the currently recognised nine subspecies are now considered ‘Critically Endangered’ or ‘Endangered’, but we have been sounding the alarm for a few years now.” – says Dr Julian Fennessy, co-chair of the IUCN SSC GOSG, and Director of the Giraffe Conservation Foundation (GCF). 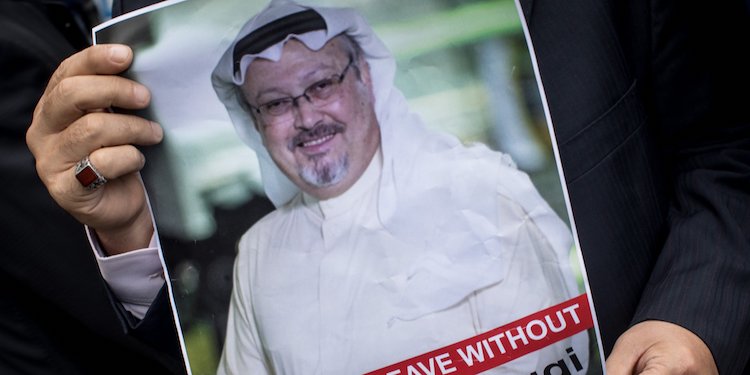 A Turkish columnist has released information saying the CIA has a voice recording of Saudi Crown Prince Mohammed bin Salman calling for Saudi critic Jamal Khashoggi to be silenced “as soon as possible.” Jamal Khashoggi is the journalist who was murdered at Turkey’s consulate in Istanbul a couple months ago. He went there to obtain a document certifying that he had divorced his ex-wife, so that he could marry his Turkish fiancée, not thinking anything bad could happen on Turkish soil. He had been openly criticizing the Saudi government for the last year during his self-imposed exile in the US after falling out of favour with the Saudi royal family.

A couple days ago Trump tweeted that the US will support Saudi Arabia despite the possibility that Crown Prince Mohammed ordered Khashoggi’s killing. Trump says it isn’t in US interests to publicly break with the 33-year-old monarch set to rule the US-allied kingdom for the next four or five decades. However, now that the news has said the CIA has been recording calls, the US is exposed for spying on its allies.