to people we have no desire to actually catch up with.

The most difficult part of a conversation can be figuring out how to end it. “Let’s catch up sometime” seems to be a the generally accepted default expression used to end a conversation with an acquaintance or person from your past. But let’s cut the bullshit once and for all: We all know you have no intention of actually following through and catching up with this person. 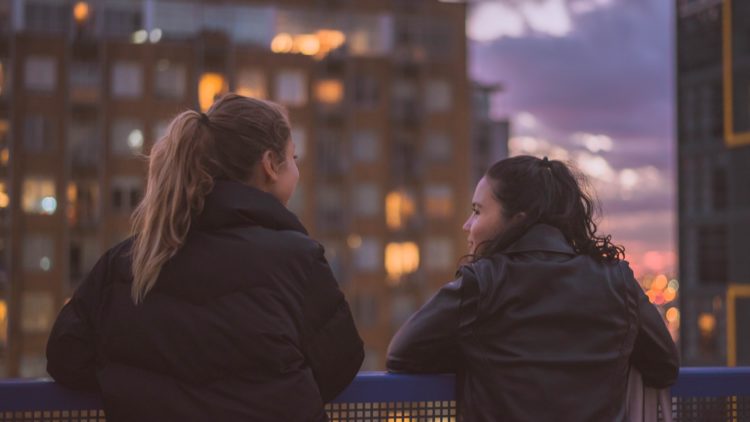 The other day, I went to a movie with a friend. As we were making our way out of the theatre, a familiar face caught me eye through the crowd of people. “Julie!” I called out and waved.

Julie is someone I went to high school and had not seen since we graduated ten years ago. Julie is a perfectly nice person, but someone I was never really friends with. She was merely an acquaintance who I would occasionally engage in polite conversation with.

Julie turned around and greeted me with a warm smile. “Hey!” she said. “How have you been?” Julie and I spent the next few minutes catching up on what we had been up to over the past several years as her boyfriend stood behind her, bored out of his mind.

“Well, I should get going,” Julie said, glancing at her boyfriend as he widened his eyes as if he were sending her telepathic signals urging her to wrap up the conversation.

“No worries,” I said. “It was great running into you!”

Ready to pivot on my heel and continue out the door, Julie said, “We should go for brunch sometime and catch up!”

The corners of my mouth dropped as my smile turned into a grimace. Didn’t we literally just catch up? I thought to myself. Julie’s smile became more forced. Her eyes nervously darted back towards her boyfriend. It was as if she was thinking, Shit, why did I say that?

“Yeah, totally!” I said, forcing the muscles in my mouth into a disingenuous grin. “I’ll message you on Facebook or something.”

As I walked away, I thought about how there was no way in hell I was dragging my ass out of bed on my day off to go for brunch with a girl I hadn’t seen in a decade. Nine times out of ten, I can’t commit to plans before 11 am on the weekend, even if they were plans with my real friends. This proposed brunch was never going to happen: She knew it, and I knew it.

So why do we feel obligated to suggest making plans we all know are never going to happen? Even though I’m complaining about it, I am most certainly guilty of blurting out, “Let’s catch up sometime!” when I’m trying to end a conversation. It’s as if we think that’s the polite thing to say, but it’s totally not. Since when is saying something insincere the polite thing to do? Imagine if the other person actually followed through with making follow-up plans. You would (most likely) end up being a dick and bailing on those plans, anyways.

Here’s the thing: People constantly come in and out of our lives, and that’s okay. You do not need to be friends with everyone, and you most certainly do not need to stay in touch with the people you’ve drifted apart from. Our lives and priorities change, and our relationships change along with them. Having no desire to stay in touch with someone who is no longer in your life doesn’t make you a bad person. If you wanted them in your life, both of you would have made an effort to maintain the relationship to begin with.

So next time you’re catching up with someone who you have no intention of staying in touch
with, try an alternative conversation-ender. Say something sincere and straight to the point like,
“I have to get going, but it was great running into you!” and then walk away. Trust me, avoiding
making fake plans will leave you feeling liberated as fuck.