Maybe, Possibly the Worst Date Ever

Whatever your relationship status might be, everyone has experienced a bad date, awkward pick-up line or uncomfortable encounter with another human at some point. Singlehood is full of strange set-ups, reading too far into situations, and hearing the phrase “I’m sure you’ll find someone” way too often. The date may have been bad, but why not laugh it off with others who have experienced the same thing? Here are some of the worst and most hilarious dates as retold by others from their dating lives. 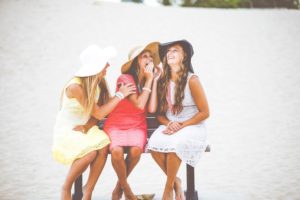 “So it was Valentine’s Day and when I showed up to my boyfriend’s house, he had the entire entryway, hallway, kitchen, living room and kitchen table covered in tea lights. There were flower petals strewn everywhere and he had gifts for me waiting on the table. He compiled a bunch of ‘our’ songs on a CD and it was playing in the background. Sounding pretty romantic right? He was in the middle of making us a big dinner and as we were standing in the kitchen talking, he leaned against the counter and his shirt caught on fire from the tea lights! The entire back of his shirt went up in flames so we were running around like mad trying to get some water to put it out. However, I wasn’t much help because I was laughing so hard!”

“This past year, I was working with a girl who I thought was really cute. We started talking and we would hang out sometimes after work. I thought it was going well so I was working up the courage to ask her out until one day out the blue, she says, ‘If I had a crush on you, I would have asked you out a long time ago.’ Maybe no date is the worst date.”

“Two guys invited my friend and I to a party at their place. We had been on one double date with these two friends before, so we assumed this was a follow up. Once we got there, both guys came up to us to chat with a girl in tow. My friend’s guy whisked her away, but my guy introduced me to the girl beside him and put his arm around her… So there I was alone at a party where I knew no one and was forced to make small talk with this guy’s new girl. Worst date ever!”

“I went to a Flames vs. Canucks hockey game a few years ago and the game was pretty close. I was sitting with a friend and we were beside two female Canucks fans. In the end, the Flames scored the winning goal and I cheered really loudly in the girl’s face beside me, and she punched me in the face! I was shocked and my lip was bleeding everywhere, but it stopped soon and we went on with our night. My friend and I went to Roadhouse after the game to meet up with a girl I was seeing. We were on the dance floor and started making out. When I pulled back, I saw that there was blood all over her face from my split lip! She looked like a vampire and I couldn’t stop laughing for long enough to tell her. Oops.”

“I once went on a date with a guy at the University of Victoria who told he me that he would like to buy me drinks. I ordered nachos because they are small and easy to eat while you chat while he ordered three entrees, yes THREE. This didn’t really phase me until… HE LEFT. He disappeared and left me to pay the whole damn bill. I mean at least pay half?? Or leave money for the tip?”

“So I had known this girl for a couple years, we were pretty good friends and decided to go on a date. I was pretty nervous about it but wanted to see if there was a spark so I said what the heck. It went pretty well, a few awkward moments but overall not a bad date. In the morning I woke up thinking WTF did I just do?! When I went to leave, she leaned over to kiss me goodbye and I nervously reached out and shook her hand before I even realized what I was doing and raced out the door. Who does that?!”

“This one time, a guy invited me to a party at his house. Once I got there, I realized it was his parent’s house but they weren’t home. My friend and I were not told there was a hot tub, so of course at the end of the night when everyone wanted to take a dip we were without bathing suits. So we went in our underwear, and then borrowed pajamas to sleep over on the couch. We woke up early to leave the next day and instead of sneaking out unannounced, his mom came into the living room holding our bras which we had left outside on the deck over night but they had frozen completely solid!”

“Not once but twice I have been approached in a bar and told that I have great ‘baby birthing hips’ in a serious context. This is not a joke, they were not laughing. This statement was shortly followed by ‘Can I buy you a drink?’ Needless to say, these pick-up lines did not warrant them a date!”

“I met this guy on Tinder who I thought was super attractive so when he asked me out, I said of course. I was pretty excited about the date so when I got to the bar, I was ready to chat away and get to know him. However, once he started talking, I realized he had a higher pitched voice than me! I tried to get past it but I could hardly focus on what he was saying.”

So there you have it, you definitely aren’t alone in the bad date diaries. But the important thing to remember is that it’s okay to laugh at yourself sometimes. Embrace the embarrassing and enjoy meeting new people, no matter how quirky they might be.

Kelsey Woods is a Content Writer for It’s Date Night