Tinder Nightmares: My Date With Elmo

What follows is a true story, as experienced by a real woman in Calgary.

I am someone who doesn’t like to take myself too seriously. As such, Tinder is an absolutely terrible place for me, because the app is made up primarily of people who are taking themselves way too seriously. Between the mid-workout pics, the inspirational quotes, and super braggy bios, it’s very challenging to find a person who demonstrates anything reminiscent of a sense of humour. The most common photos women seeking men in Calgary are forced to gaze upon on Tinder are either a man holding a fish or a picture of a guy in front of his super lifted truck (presumably with testicles dangling from the hitch). Maybe I’m wrong, but I would be very surprised to hear of a guy getting laid because someone was impressed by the picture of the rainbow trout he caught in the Bow River two summers ago. 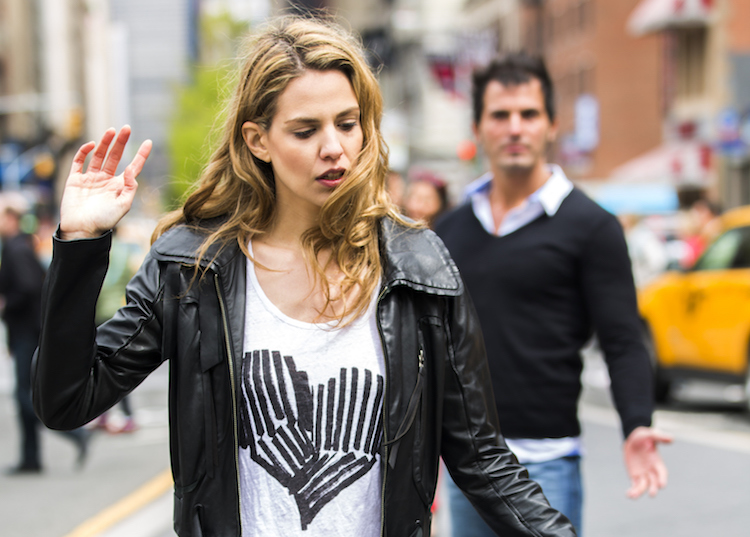 After weeks of swiping left into the abyss, I was relieved when I came across the profile of a guy I’ll call Steve. Steve was an attractive guy in his mid-twenties with a good job, cool hobbies, and had a clever Archer reference in his bio. But more importantly, Steve clearly gave no fucks. Every single one of Steve’s photos depicted him doing something hilariously stupid. There was a picture of Steve in a barren landscape wearing a Borat-style thong, ass facing the camera. Then, there was a picture of Steve on top of a palm tree in bright pink swim trunks, tossing coconuts onto the sand below. And then, there was a picture of Steve wearing a Cookie Monster costume, snowboarding down the side of a mountain. With my standards drastically dropping with every swipe in search of a well-humoured individual, Steve seemed to be the diamond in the rough I was looking for. Little did I know, that Cookie Monster costume should have been my first warning sign of things to come.

After a few days of very entertaining messages back and forth, I agreed to meet Steve for a drink at a pub on 17th Avenue. I arrived on time, grabbed a table at the back of the bar, and ordered a drink. A few minutes later, I received a message from Steve: “Hey, sorry, I’m running a few minutes late.” As I sipped on my Lone Tree cider and mindlessly scrolled through my Instagram feed, something bright and red caught my attention out of the corner of my eye. I looked up and realized a human-sized Elmo was walking towards me.

Elmo sat down and said, “Hey, are you Kelsey?” “Yes,” I replied, laughing uncomfortably. “What the fuck are you wearing?”

“Sorry, I just got off work,” Elmo said, removing his three foot wide, fuzzy head to reveal Steve beneath it. “I’m an Elmo impersonator,” he lied, smoothing down his long blonde hair.

The entire bar stared and took photos of us, as Steve ordered a Guinness. Steve’s beer arrived, and he said, “Nah, I was at dinner with my friend before this and we started talking about how funny it would be if I showed up to my Tinder date wearing an Elmo costume.” Steve took a sip of his Guinness and wiped the thick foam from his upper lip. He continued, “That’s why I was late. I had to run home and change.”

Well, I’m already the butt of this guy’s joke, I thought. I better stick around and see what happens next. It’s not like this could get any worse.

Steve and I continued to have normal(ish) first date conversation as we talked about our families and jobs. Steve then told me a story about sleepwalking and peeing in various places around his house. I politely laughed, as I attempted to drink my cider as quickly as possible. 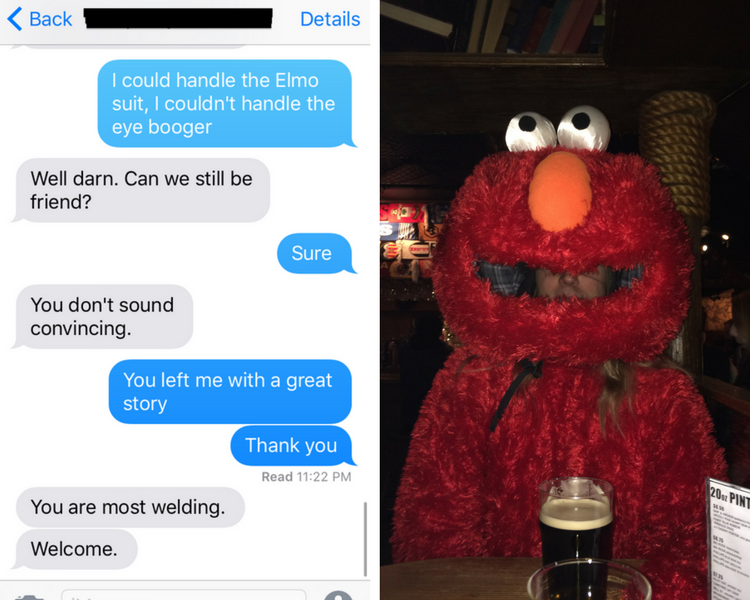 As I was telling Steve about my job, he began wiping his eyes. He then wiped mucous out of the corner of his eye with his index finger, examined it with his outstretched finger, and proceeded to lick it off. Disgusted, I choked on my cider.

“Did you just eat your eye booger?” I asked, through clenched teeth.

“It’s actually bacteria. That’s disgusting.” I argued, digging through my wallet for a $10 bill. I put the money down for my drink, and politely excused myself from the date.

“Wait, you’re leaving?” Steve yelled at the back of my head as I walked away. “Could you at least give me a ride home?”

After I left the date, Steve texted me to ask if we could still be friends. Reading Steve’s text, I felt the same pity I once felt observing a severely inbred Dalmatian gnawing on his own tail. I agreed we could be friends, but we both knew I didn’t mean it.

If this bad date taught me anything, I learned why those fish pictures work on girls: If you stick with a guy who takes himself too seriously, you won’t be forced to watch a grown man in a Sesame Street costume eat his own excretions in public.

Do you have a Tinder nightmare you want to share with us? Please email us at rachel@itsdatenight.com.

Despite horrible Tinder date memories, Kelsey met her current boyfriend on Tinder and proves there are diamonds in the rough.